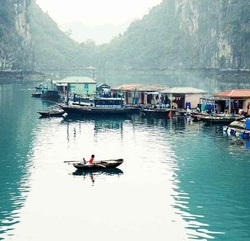 Legend has it that Halong Bay was created by dragons sent by the gods. Considering how otherworldly Halong Bay looks, it does seem that its legendary dragon origins might not be too far off the mark. How else to explain the almost ethereal look to this amazing coastline? You see, Halong Bay is made up of many small islets of rock that seem to float off the water. These green topped islets look like they are suspended off the water. Floating islands. Many of them. The whole Halong Bay scene seems like it came from a George Lucas film still but is actually quite natural. If you ride up to one of the many islands in the coastline, you will quickly realize that they are tree or vegetation topped limestone outcroppings that eroded in a distinct way. Thanks to many precise natural processes, Halong Bay looks like a scene out of a dream. Halong Bay transforms mere trips to Vietnam into the best Vietnam tours.
Powered by